You have a computer that continues to give problems and, after talking about it with a friend who is quite knowledgeable in the IT field, he advised you to carry out theBIOS update. Well-intentioned to follow his advice without disturbing him further, you searched for information on the subject and ended up on this tutorial of mine.

That's the way it is, right? In this case, know that you are in the right place at the right time! In the course of this guide, in fact, I will explain to you how to update your computer's BIOS providing you with all the information on the procedures to be implemented and the potential risks that this entails. Oh yeah! Although the BIOS update procedure is not difficult, it is far from risk-free!

Make sure, therefore, to read the preliminary information chapter of this guide very carefully and act only if you are fully aware of the consequences: I will not be held responsible in any way for any damage that may occur as a result of incorrect application of the directions below. Then don't tell me I didn't warn you! 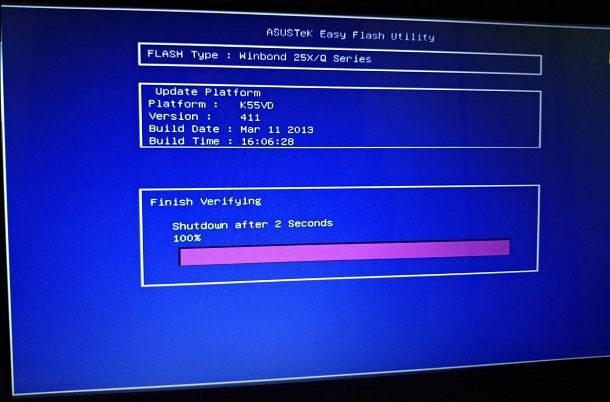 Before getting to the heart of this guide and explaining, in practice, how to update the BIOS, let me give you some more information about the implications, positive and negative, of this procedure.

Let's start by understanding what the BIOS actually is and what it is for: in simple terms, the latter is a sequence of instructions (with an attached management interface) residing on a memory physically soldered onto the computer motherboard, capable start the entire hardware compartment of the computer and make it available to the operating system and the programs that request it.

On newer computers it has been replaced with UEFI, a system that acts with the same criterion but is more advanced and contains many additional features, such as a relatively simple graphic interface that can also be used with a mouse, the ability to manage disks larger than 2.2 TB (insurmountable BIOS limit) and systems advanced security and protection. Unlike BIOS, as well as on a specific motherboard chip, the small UEFI operating system also finds space on a dedicated part of the hard disk.

Regardless of the hardware management system in use on the motherboard (and on the computer), it is easy to imagine that intervening on the same, especially with updating and reflash operations (ie rewriting the basic instructions), represents aextremely delicate operation, which should not be done lightly.

Updating the BIOS / UEFI, in fact, is quite dangerous: an incorrect file or a power failure before the end of the procedure is enough to break the motherboard and force you to send it for assistance, or to buy a new one: in fact, replacing the damaged chip is a possibility that not all manufacturers make available.

For this reason, before you even do anything, ask yourself if the update operation can actually bring tangible improvements to the computer experience: if the performance is good, all the hardware is working properly and the thing is not. it is explicitly from the manufacturer (due to some serious error in the BIOS / UEFI or, even worse, some security flaw), then do not take unnecessary risks and avoid doing it.

How to Update the BIOS

Now that you have all the theoretical notions on the subject, it is time to get to the heart of this guide and to understand, in practice, how to update motherboard BIOS.

I want to let you know right away that it is not possible for me to list specific steps for the hardware in your possession, since each motherboard and each BIOS can have different update procedures; however, in the following sections of this chapter I will take care to provide you with general indications regarding the steps to be implemented, valid for most firmware. 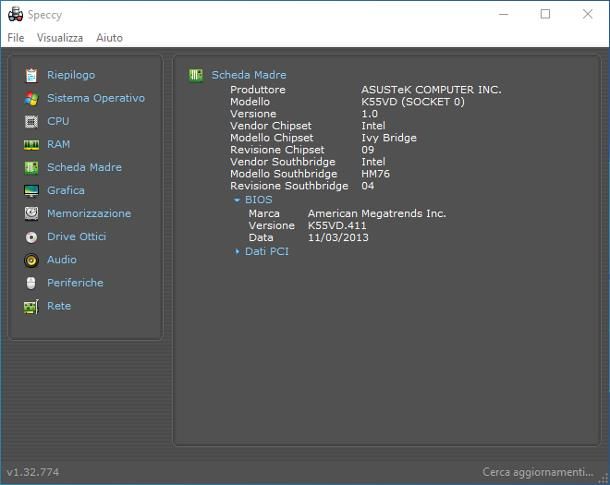 First, in order to download the correct update to apply, you need to know the precise model of the motherboard installed on your computer. If you don't have this information, you can easily trace it back using hardware analysis software, what it could be Speccy: to obtain it, connected to the program's website, click on the button Download Free Version and then on the buttons free Download e Download.

Once you have downloaded the software installation file (eg. spsetup132.exe), run it and click on the buttons Yes e install, to complete the setup; finally, remove the check mark from the box View release notes and press the button Run Speccy, to run the program.

Now, to translate the Speccy interface into Italian, go to the menu View > Options… (top), set the drop-down menu Language, located in the window that appears, on Italian and confirm the change by clicking on the button OK. Back at the Speccy main screen, you should immediately see the make and model area of motherboard, looking at the homonymous voice.

To get more detailed information on the same, including the BIOS version currently installed, click on the item Motherboard, located in the left pane. As you can easily imagine, you need to write down the produttore and the model of the motherboard, along with BIOS information such as brand, version e release date. 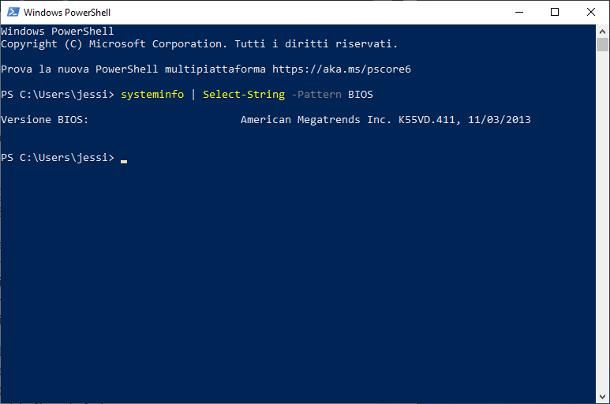 If the installed BIOS / UEFI firmware version is not immediately visible, open a PowerShell (by right clicking on the Start button Windows 10 and selecting the appropriate item from the proposed menu) and type, inside, the command systeminfo | Select-String-BIOS pattern, followed by pressing the key Submit of the keyboard.

If you find it difficult to put into practice the steps that I have shown you so far or if you need additional information on them, I refer you to reading my guide on how to identify the PC motherboard, in which I have dealt with the topic in great detail. of details. 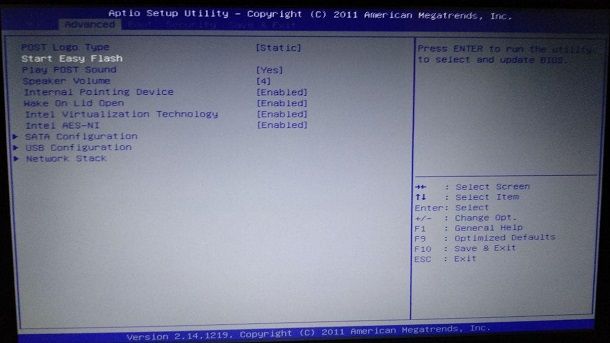 After collecting the necessary information, you are ready to begin the actual update phase. There are several ways to update the BIOS: the safest is to download theappropriate update software, if available on the motherboard manufacturer's website - after reaching the latter, download the package .zip containing the executable of the update program and, after extracting it, start the executable file contained in it and carefully follow the on-screen instructions.

At the end of the procedure, that it must not be interrupted for any reason (under penalty of breaking the motherboard), you will see a message indicating the successful update and the need to restart the computer.

In other cases, it is possible to proceed with the BIOS update via the PC manufacturer's management software (e.g. ASUS Live Update), within a couple of clicks: this option, however, is only available on notebooks and on pre-built computers, on which such programs are usually pre-installed. 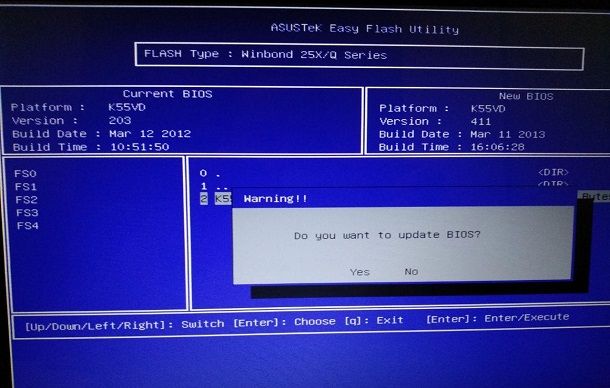 As I explained earlier, however, the automatic BIOS update system is not available for all motherboards: the most common method, however, is to manually download the firmware of the same, in the form of a ZIP package, to be subsequently installed directly from the BIOS.

To do so, connect to the website of your motherboard manufacturer, locate the section dedicated to support and, after specifying the model of the motherboard, proceed with the download of the latest BIOS firmware dedicated to the same, if it is more recent than the one in your possession (if not, I strongly advise you not to go ahead: you would only run into unnecessary risks).

To give you a concrete example, if it is your interest update ASUS BIOS, connected to the official download center of the manufacturer, indicates, in the appropriate text box, the model of the motherboard (or notebook) in your possession and click on the most relevant result among those proposed. Alternatively, you can "manually" select a product, using the drop-down menus immediately below. 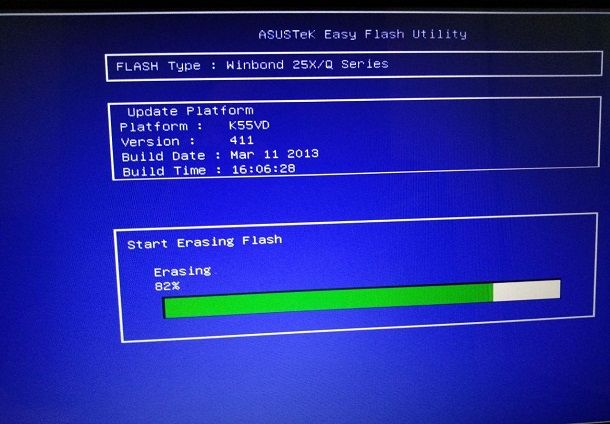 After correctly identifying the product, click on the link dedicated to Driver & Utility that appears on the right, expand the tab BIOS & Firmware and click on the button Download, located next to the latest BIOS version. Once you have the archive, extract it and, for convenience, move the file obtained directly to the system disk (eg. C: ).

Once you have the necessary file, proceed to restart your computer, to enter the BIOS: Typically, all you have to do is repeatedly press the keys Canc / Del, F2 o F12until the peripheral management interface of the computer appears. If you need more precise information on how to enter the BIOS, take a look at the in-depth tutorial I have dedicated to the topic. 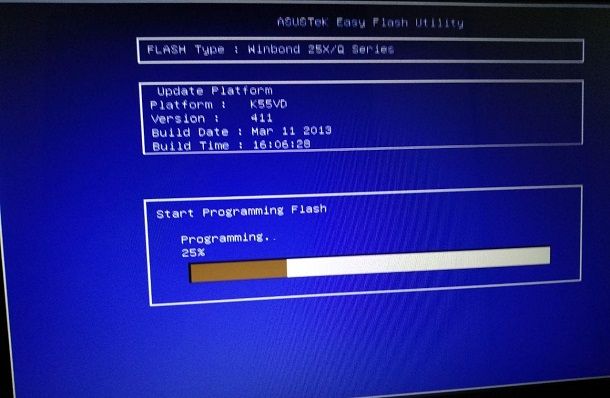 At this point, using the options proposed, choose the disco on which you saved the update file, select it and answer affirmatively to the request to continue with the BIOS update: starting from this moment, the computer must not be turned off absolutely until the end of the procedure, otherwise you could permanently break the motherboard, with no margin for recovery.

Indicatively, the BIOS update operation consists of three different steps: the initial cancellation of the boot chip, the writing the new firmware and validation of the written data. At the end of these three phases, the computer will be shut down and / or restarted and will be ready to be used again.

How to Update UEFI 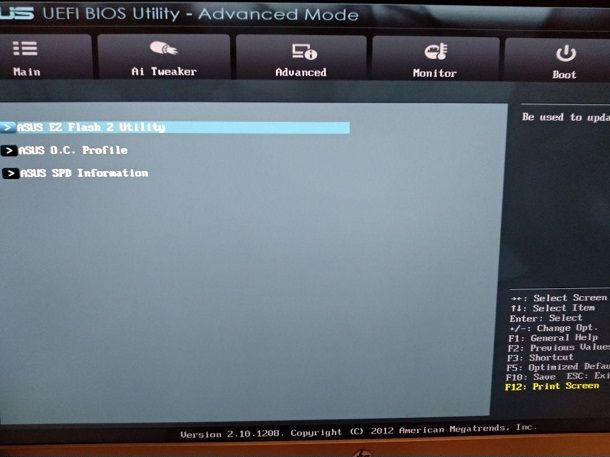 If you have a recent computer, it does not have a BIOS but a UEFI, things could go still differently. Some UEFI systems use procedures very similar to those just seen for BIOS: after downloading the update file, it is enough enter UEFI, click on the button related to Advanced Settings and then on the utility dedicated toupdate / update, through which to load the package obtained previously.

Now, wait for the Windows Advanced Startup Settings to appear and click, in sequence, on the items Troubleshooting, Advanced options, UEFI firmware settings e Restart: on the next reboot, you should find yourself in front of the UEFI configuration panel. If you need additional help, I invite you to read the specific guide I made on the subject.

In some cases, the update can also be applied completely automatically, simply by inserting a prepared USB stick "Ad-hoc" on the computer: therefore, locate the the manufacturer's website the files needed to create the boot drive, if available, download them and, after formatting the USB key, copy them onto it (without inserting them in any folder).

When the boot device is ready, restart your computer, log in to UEFI, go to boot options and select the entry to boot from USB EFI Shell: if everything went well, the update should start completely automatically and be completed within a few minutes. Again, the computer must remain categorically on during the entire procedure.

For completeness of information, I would like to point out that some UEFI managers are able to download, extract and install software updates directly from the Internet: in this case, the only task for the user is to start the appropriate configuration and to select, if required, the network card through which to make the connection (generally, it is sufficient to connect the computer and router to each other, using an Ethernet cable).