Have you ever wondered how to hack a pc? If you have come to this guide, I understand that your curiosity on the subject is great, I hope not because you want to violate other people's systems, but more than anything else because you want to know how to defend yourself from the hacking techniques used by cyber criminals. Did I guess?

Well, if that's the case, I know so much that you are in the right place at the right time! In the next paragraphs, I will have the opportunity to briefly illustrate some of the main "weapons" used by cybercriminals to hack their victims' PCs and, more importantly, I will also show you how you can defend yourself from them.

Just a necessary clarification before starting: this article was written for illustrative purposes only and, for this reason, I do not take any responsibility for the potential misuse that you could make of the information contained in it. Remember that "sneaking" into the computer systems of users and companies without having received the authorization can represent a crime. All clear? Well then let's proceed!

Let's see, first of all, some of the main ones techniques used to hack PCs. After all, it is not possible to fight an enemy without knowing the weapons in his possession, right?

One of the main tools used by cyber criminals to hack PCs are the so-called backdoor (in Italian "rear doors" or "service doors"), consisting of a code or a series of commands used to access a software or even an entire system. What is their use? In creating a communication bridge between the criminal's computer and that of the user, without the latter noticing anything.

In this way, the attacker is able to act remotely, taking control of his victim's PC and making the latter perform the necessary operations to carry out his plans: for example, he could install malicious software on it. , could use the computer to carry other cyber attacks and perform other illegal operations.

Many times, backdoors are made using malicious software called trojan, which are installed to the user by sending emails containing infected links or by having them download programs, apparently harmless, but which actually act maliciously in the background without the user knowing.

These software are particularly dangerous, as they may be able to bypass the system's protection functions (if the user has opened the router and / or firewall ports, perhaps to allow P2P software to work or to receive remote assistance ).

To make the i trojan backdoor it's the ease with which you can create them. If you remember, in the study on how to create a virus I gave you a practical demonstration.

I keylogger are another very powerful weapon in the hands of cybercriminals. As their name suggests, in fact, these software infiltrate the system and, without the user's knowledge, record everything that is typed on the keyboard, then sending this information to the attacker who is controlling the PC.

As you can well understand, they are very dangerous as they offer the cybercriminal the possibility to steal passwords and sensitive data typed, for example, in chat, messaging services, email, etc. If you remember, in my guide in which I illustrate how to spy on a PC with a keylogger, I have explained to you in more detail how this kind of programs work and how to protect yourself from them.

I also want to tell you that there are also gods keylogger hardware, ie physical devices that are positioned between the keyboard and the computer and record, also in this case, everything that is typed on the computer. To place a hardware keylogger, of course, physical access to the user's machine is required.

The so-called SOCIAL ENGINEERING is another means used by cybercriminals to sneak into their victims' PCs. What's it about? Simple: instead of resorting to the use of particularly advanced hardware and / or software tools (at least in the implementation of the "first part" of the plan), cybercriminals exploitnaivety and l 'inexperience of potential victims to sneak into their computers.

Do you want me to give you a practical example of how this can happen? The attacker approaches the intended victim and, making a more or less credible excuse, asks for his permission to use his PC. If the user agrees, the criminal takes advantage of the opportunity to install some spy software that can subsequently allow him to control the computer remotely (as I explained to you in this other guide).

How Not to Get Hacked into Your PC

After examining some techniques used by cybercriminals to spy on their victims, it is time to analyze some useful defense tools to counter their attacks: let's see, therefore, how not to get hacked into your PC.

Use a Good Antivirus 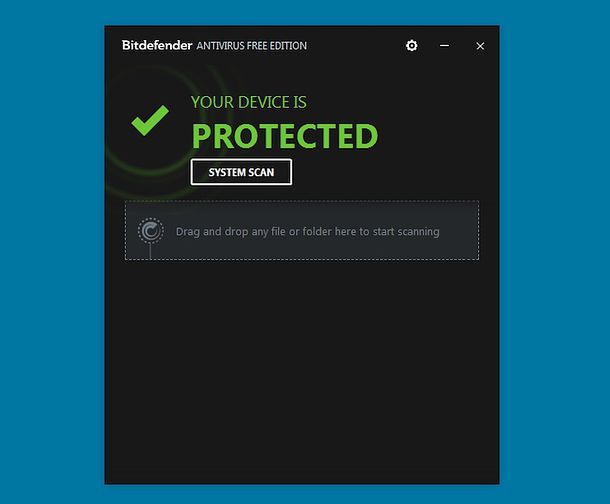 The first thing I recommend you do to protect your PC from possible intrusions is use a good antivirus, which can regularly monitor the system and block any security problems due to the presence of malicious software in the bud.

In the latest versions of Windows, it is included Windows Defender, an excellent antivirus developed by Microsoft and which I told you about in this other guide. If you want, however, you can install third-party antivirus, even free, in its place, such as Bitdefender e Avast, which I told you quite thoroughly in my guide dedicated to the best free antivirus.

You use a Poppy? Even if the computers of the "bitten apple" are less vulnerable to cyber attacks, know that also for the latter there are excellent antimalware (to be used occasionally, however, and not always running), such as those I have listed in this dedicated in-depth . 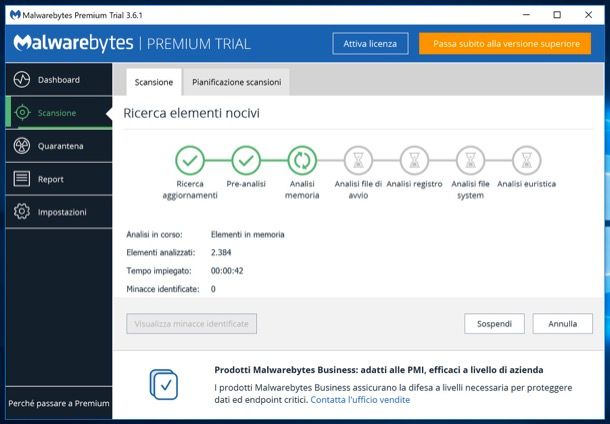 Another thing you can do to not get hacked into your PC is run a malware scan. Doing so is critical to be able to identify cyber threats that, for one reason or another, may have escaped the antivirus and could allow a cybercriminal to gain control of your computer using one of the techniques mentioned above.

One of the best anti-malware out there is Malwarebytes Anti-Malware, as it is constantly updated and is therefore able to detect threats, even those born more recently, ensuring good system security. It is available for free download for both Windows that for MacOS. A paid version is also available, which offers a real-time control system, but if you want my dispassionate opinion, this is not a fundamental function (just do a manual scan from time to time to sleep relatively well. don't worry).

If Malwarebytes Anti-malware does not satisfy you, you can try one of the many alternatives available, such as those listed in this tutorial. 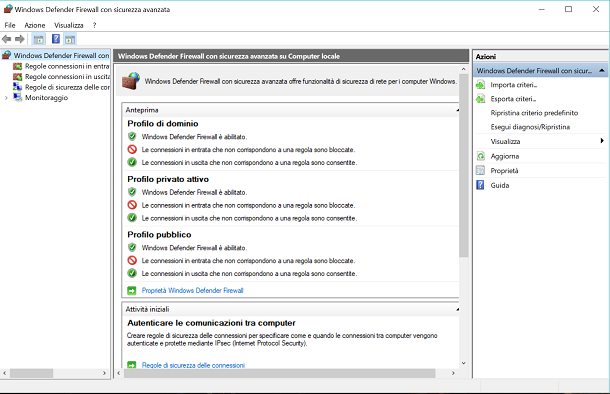 Use a firewall is another thing I suggest you do to protect your PC from any intrusion from the outside. Are you wondering what a firewall is as you've never heard of it? I'll explain it to you right away.

The firewall, which can be both software and hardware, protects the network from unauthorized access, therefore from possible intrusions from the outside. Be Windows and MacOS integrate a firewall that is already active by default (although, as I showed you in another guide, it can be deactivated quite easily).

In any case, know that it is also possible to use third-party tools that can enhance or help them in their action, such as Windows Firewall Control for Windows and Little Snitch for macOS.

The use of these solutions allows not only to expand the functionality of the firewall integrated into the system, but also to monitor network activities more easily.

Most of the time, malware is downloaded together with software that, at least on the surface, seems "harmless". Obviously, the user who does this is unaware of the danger he is running and when he realizes it (assuming he is able to do it) it is almost always too late.

To avoid falling into this trap, I urge you to do not download programs from dubious sources, therefore preferring the applications that are already available in the Microsoft and Apple stores. For what reason? The programs included in the stores in question undergo a long and complex process of analysis and review before being made available for download.

If you really see yourself "forced" to download programs outside the Microsoft Store or the Mac App Store, carefully check their reliability by using online tools, such as VirusTotal (well-known online antivirus that allows you to check any file and link using the of about seventy antivirus) or WOT (which allows you to analyze the reliability of websites through user reviews and opinions). More info here. 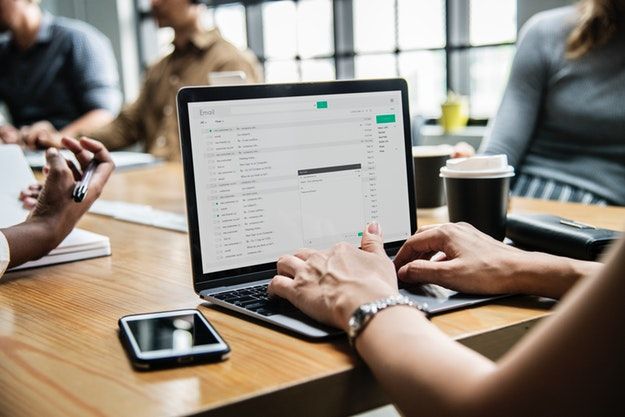 Do not open attachments received via email it is another fundamental precaution, if you want to avoid "trouble". Unfortunately, even the most reliable senders should not be trusted, as they could use PCs that are themselves infected with malware and therefore used, without their knowledge, to spread malicious code.

Fortunately, many programs and Web services for accessing e-mail prevent the receipt of executable files for Windows and macOS (e.g. those in format .exe, .dmg,.Java,.js o .vba), as they are the most used formats for the spread of malware, but you must also pay attention to PDF, Office file and other file types.

Even if these attachments for some reason escape the security checks made by the client or Web Mail service you are using, do not open them anyway. Understood? 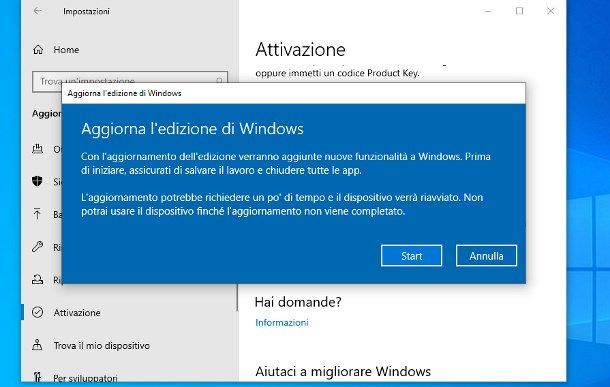 Update the programs and the operating system is another useful security measure to thwart cyber attacks. In fact, updates often contain fixes to any security flaws exploited by cybercriminals to hack PCs.

To see if any updates are available for your PC, if you use Windows 10, go to the menu Settings (just open the menu Start and click on thegear placed in the sidebar), go to Update and security and select the item Windows Update from the bar located on the left.

If your PC is equipped with Windows 7instead, open the menu Start (by clicking on the flag icon located in the lower left corner of the screen), type "windows update" in the appropriate Campo di Ricerca and select the first entry that is found. More info here.

To find new updates on MacOSinstead, click on the icon "bitten apple" at the top left, select the item About this Mac from the menu that opens and click on the button Software update…, to see if new updates are available. More info here.

Also remember to update programs you have installed on your computer: you can do this from the store present on your computer (if you downloaded them from there) or using the integrated update function in the software itself, usually accessible from the menu ?. More info here.

I Will Avoid the Public Wi-Fi Withdrawal 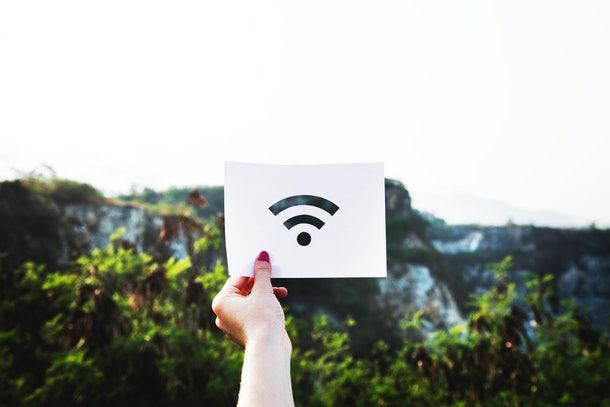 I also advise you to avoid public Wi-Fi networks, as, not being adequately protected, they are definitely vulnerable to cyber attacks and are often used by cybercriminals to "sniff" the data of users connected to them.

When you are away from home, if you really need to connect to the Internet, use the data connection of your mobile phone, perhaps using it as a modem. Obviously, in order to do this, you must have a data plan with enough Giga and with support for the tethering / hotspot function (now however supported by the vast majority of data plans available in Italy).