Goat Simulator is one of the biggest "cases" of the contemporary videogame market. It is a hilarious simulator, or rather, the parody of a simulator, in which you have to impersonate a goat and interact with the surrounding scenery. Once in the game it is possible to transport things or people, sneak into buildings, make very high jumps and… of course, horn everything that comes within range of the cute little beast!

All this, as if this were not enough, is "seasoned" by numerous glitches, intentionally left in the game by the developers, which contribute to making the gameplay incredibly crazy and unpredictable. Would you like to play it? No problem, I'll tell you how to do it right away.

Goat Simulator is available for all major desktop and mobile platforms, plus some video game consoles, and its price is really affordable: just under 10 euros. There are also expansions available (also for a fee) that introduce RPG-style elements into the game and - just think - a survival mode in which people and goats are transformed into zombies. So, ready to find out how to download Goat Simulator? Fun is guaranteed! 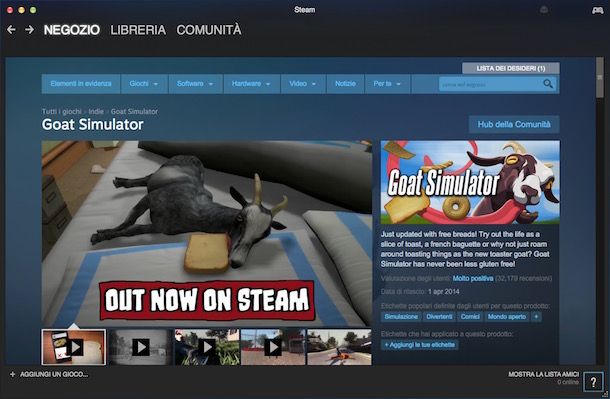 If you want scaricare Goat Simulator on your computer you have to contact Steam, the famous digital game distribution service produced by Valve.

Then connect to the service's website and first click on the button Install Steam (located at the top right) and then on the item Install Steam adesso to download the official Steam client to your PC.

The Steam client is available for Windows, Mac OS X and Linux. If you are using a Windows PC, open the file SteamSetup.exe and click on the buttons Yes e forward. Then put the check mark next to the item I accept the license agreement and complete the setup by clicking on first forward twice in a row and then on Install e end.

If you are using a Mac instead, open the package dmg that you downloaded from the Steam site, copy the client icon into the folder Applications of OS X and launch the program.

At this point, wait a few minutes for all the components necessary for Steam to function (more or less 115MB of data) to be downloaded from the Internet and click on the button Create a new account to create your free account.

Once in Steam, search for Goat Simulator in the top right bar and select the name of the game from the search results. Then click on the button Add to Cart, select the option Purchase for me from the screen that opens and pay for the game by selecting one of the accepted payment methods (credit / prepaid card or PayPal).

When the operation is complete, wait for the video game download to complete and start your first game of Goat Simulator by selecting the game title from the library of Steam and clicking on the button Play.

The standard price of Goat Simulator for computers is 9,99 € but during the promo periods it can also be found at half price (or less).

The expansions of the game currently available are GoatZ which transforms Goat Simulator into a zombie-themed survival horror (4,99 euros) and Goat MMO Simulator which instead adds MMO elements to the title (free).

Please note: before completing the purchase of Goat Simulator check that your computer complies with i system requirements provided for the operation of the game. You can find them listed in the game tab on Steam.

If you want to install Goat Simulator on your smartphone or tablet, all you have to do is open the official store of the device (App Store on iPhone and iPad or Google Play on Android), search for the game title and press the button with the price of the application.

To make it easier for you, I now provide you with links to buy Goat Simulator directly on Android and iOS plus links to purchase its expansions, which are distributed in the form of separate apps in the mobile environment.

If you have one Xbox 360 or a Xbox One you can enjoy the madness of Goat Simulator on console too. All you have to do is go to the console's Marketplace and buy the title for 9,99 euros, or download his Free demo.

If you need help setting up your Xbox and downloading games over the Internet, check out my guide on how to download Xbox 360 games.