Reading my guide dedicated to the operation of QR codes has certainly clarified your ideas on what this Web tool actually is. However, you think you want to know more about it and would like some other advice regarding specifically app to read QR codes.

Is this what you need? If so, you will be happy to know that I can help you in the blink of an eye. In this tutorial, I'll give you an in-depth overview of how to use some popular apps to read QR codes. Don't worry, the procedure isn't difficult at all; you will see that if you follow the instructions contained in this guide in detail, discovering the content of a QR code will really be a walk.

All you need right now is a few minutes of free time, but most of all, your Android and iOS smartphone. Not only will I talk to you about recommending some applications to download to succeed in your intent, but I will explain in detail how to use them. You will therefore have to always keep your device at hand and follow the procedures indicated with me, step by step. You will see, at the end of the reading I am sure that you will be satisfied with when you learn and you will also be able to help your friends by explaining what you have learned and recommending them. Let it bet? As usual, before we begin, I want to wish you a good read. 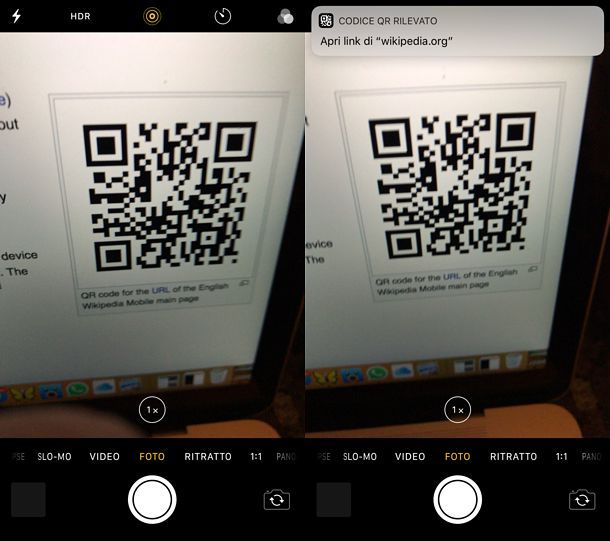 With the introduction of Apple's new iOS 11 update for its iPhone and iPad devices, the ability to read QR codes directly with your device's built-in camera has been introduced.

To check if this feature is active on your device with iOS 11, from the main screen, swipe the screen with your finger left or right until you find the app Settings. Tap on it and scroll down until you find the wording Camera and tap on it.

In the screen that opens, check if the entry Scan QR Codes is active: it will be obvious from the fact that next to it you will see a lever with a green background, instead of white. If the voice is turned off, tap its lever and move it from OFF a ON to activate then activate the feature.

Open the app now Camera of your Apple device and scan a QR code: a notification will appear at the top with the link to open via the browser you use on your device. Then tap on the notification to open the QR code link.

From your device's home screen, swipe the screen left or right until you find the app Settings (has the symbol of a gear). Then tap on it and select the item General.

Different items will appear on the screen; then tap on Info. Among the many items, the one to take into consideration is Version, which must be of the type 11.XX. If you see a number less than 11, you probably haven't updated to the new version of iOS yet.

Then go back to Settings > General and select the item Software update: if an update is available, you will be given the version to download. Then press on Download and install to update your device to iOS 11 and be able to get the QR code reading functionality, available directly through the integrated camera.

However, this new feature is not available for versions prior to iOS 11. In that case, it will therefore be necessary to download an app from the App Store that can perform this task. For this reason, I will therefore propose to you in this article a list of applications to read QR codes compatible with your Apple device. 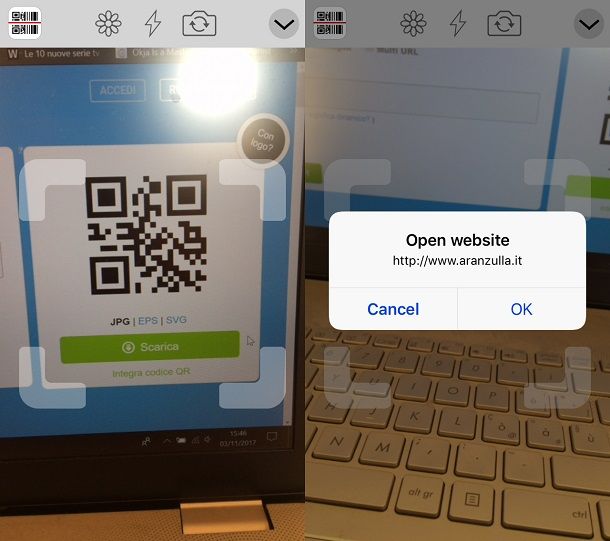 Another good application for Apple's mobile devices is QR Reader, available free for iOS. The app is initially presented in English, but it will be possible to change the language to Italian later. The app in question is also available on iPad.

After downloading the app from your device's App Store, tap apri. When the app opens, a window will appear that will introduce you to the main features of the app, which you can close by pressing the button Next and then Skip. A window will then follow asking for your consent to access the camera; then tap on OK.

Now you just need to frame a QR code, taking care to place it between the four target markers that you will see in the center of the screen. The application's integrated browser will then be opened and will refer to the link contained within the QR code. If the scan contains plain text instead, this will be displayed through a preview window.

As for the app viewed previously, QR Reader also has the same features. It will then be possible to start a scan starting from an image in the device memory, by tapping on theflower icon and selecting the image to analyze.

If you want to avoid opening a link immediately after reading the QR code, you can activate the function in the app settings. On your device, then tap at the top right on the symbol with a down arrow; then tap on the gear symbol at the bottom and activate the voice Ask before opening.

To see the history of QR codes scanned through the app, tap at the top right on the symbol with a down arrow; then tap on house symbol to be able to see the list of QR codes you have scanned.

The QR Reader for iPhone app is not completely free: presents some non-invasive advertising banners, which can however be removed by upgrading at a cost of € 3,49. Included in the price is the possibility to unlock some additional features such as the ability to select the browser to open the links scanned by the QR code. 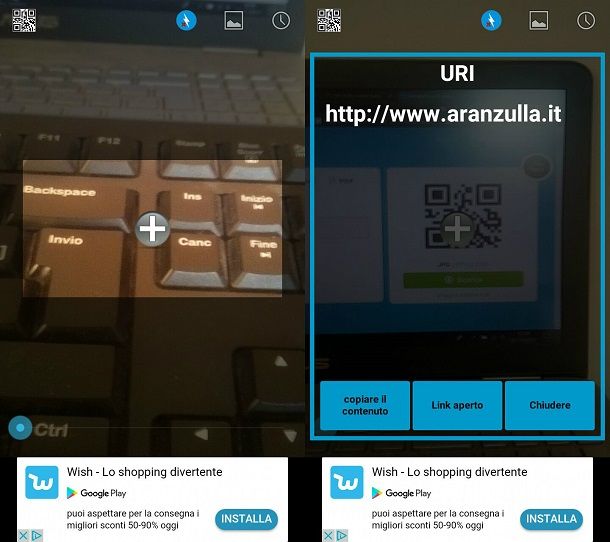 Another good app for reading QR codes on your device is QR Code Reader, available for free on Android mobile devices. All you have to do to get this app is to download it from the PlayStore and then press apri. You will be asked to consent to access the camera, which message you will need to confirm.

What you have to do now is to frame the QR code you want to read, taking care to place it inside the box you see in the center of the screen with a symbol of a cross. If necessary, use the lever at the bottom you see on the screen, moving it from left to right, to be able to adjust the zoom on the code, in case you need it.

Once the QR code has been read, a window will appear with buttons that will allow you to copy the reading content (Copy the content), open it on your browser in the case of a link (Link open), or cancel the operation (To close).

QR Code Reader has few but simple features for reading QR codes. You can browse the history of the scanned codes by clicking on the icon with the symbol of a clock at the top right of the screen. You can then also decide whether to remove the individual elements of the list, by placing the check mark in the box next to the element and then pressing the trash can symbol; you can also export the list of QR codes read in CSV format, by tapping on the icon with the symbol of a sheet of paper with CSV written, located at the top of the screen.

You will also be able to read a QR code using an image already present in the memory of your device. Just tap on thepicture icon at the top of the screen to open your device's media gallery.

QR Code Reader, being a fully app free, has a persistent banner at the bottom of the screen that is a bit invasive.

Other Apps to Read QR Codes 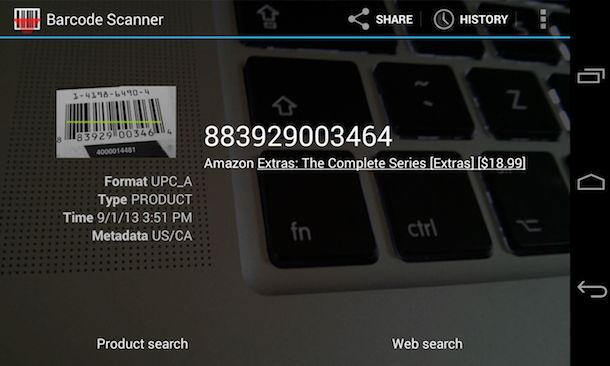